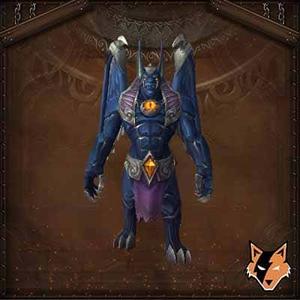 Foxstore offers you to purchase Ny’alotha, The Waking City service from our professional boosters. The best gear, a lot of achievements, essences for getting powers, azerite items and of course twelve bosses headed by N’zoth are waiting for you in this patch. In this boost you will experience the battles with the servants of the old gods yourself! Win the Black Emperor, Dark Inquisitor Xanesh, Wrathion, Shad'har the Insatiable, Il'gynoth, Corruption Reborn, Maut, The Hivemind, Drest'agath, Ra-den the Despoiled, Vexiona, Carapace of N'Zoth and of course N'Zoth, the Corruptor to get the nice rewards!

The current raid will finalize the BfA. Also, you will get to know what is going to happen in the next WoW expansion. New raids that appear at the beginning of the new version are not that easy to complete. If you are fed up with dealing with the enemies or just want to receive a quick and plain run with the finest gear, then this boosting is a nice idea. As for the difficulties: it will be possible to play in normal difficulty and heroic difficulty in 14-21 days after the version release. For LFR and Mythic difficulty you will have to wait one more week. In this run there are such ilvls:

You can simply order a run for any region and faction daily. We tried to create the schedule that would be convenient for almost every our customer. A standard Ny'alotha boost takes place with the use of personal loot. It means that you get a 20% possibility to receive an item from every boss. However, this system may not work properly sometimes, so we decided to add a loot-trading regime with those having coolest gear. That is even a better option as you will get all the gear from the raiders who are present in your group during the carry. This Ny’alotha boost is provided only one time a week for every character. So, if you are willing to increase the amount of the loot-drops, make sure you bring a lot of bonus rolls.

In addition to this, there are two new mounts that you may receive during the raid. The first mount is called Ny'alotha Allseer. It is possible to get it if you kill the final boss — N'zoth, but only in Mythic difficulty mode. Also, for each killing in the raid only one mount is provided. The worth of this mount is only rising because it is quite difficult to defeat N'zoth on Mythic difficulty. If you want, our team can win the boss and provide you with this unique mount. The drop chance is 100%! The second one is called Uncorrupted Voidwing and will be given if you complete several not complicated quests that open after N’zoth is defeated (in heroic difficulty mode). To start this quest you should have Spawn of Vexiona item. We have been offering this boost since the raid Ny'alotha, the Waking city was released. But mind that it will be available only in BfA expansion.

Thank you
Mark Clyde
Thank you for boost and amazing leveling!
Answered any questions or messag...
Jake
Answered any questions or messages within a day and delivered reasonably quick.
Great service and contact as alw...
Roman Tiahnii
Great service and contact as always!
Excellent Seller!
Dimas Snezhkov
Excellent Seller!! Very Pleased!! Will Buy Again!! Thanks!!
Awesome seller
Fred Noros
Awesome seller! No worries! Shipping was amazing! Thank you!
Ordered 2000-2600 rating on my s...
татьяна головина
Ordered 2000-2600 rating on my shaman in piloted. Team streamed boost and I'm happy. Thank you so much.
×