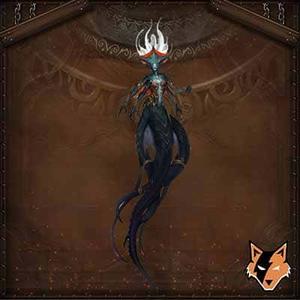 Before the Great Sundering, it was difficult to meet night elves who would have golden eyes, and Queen Azshara was lucky to be born with such a wonderful eye color. At those times eyes of gold were considered to be a symbol of later majesty. And it happened so. Night elves admired the queen's beauty, so she became the most loved ruler in their history. Cunning and incredibly attractive, a queen of strong will had probably the most chance to become a magician than anyone else. The Well of Eternity interested her so much: because she was of The Highborne class and the only authority successor. It took several days to coronate her. Every night she was receiving expensive presents from the Highborne nobility as they wanted to get her kindness, but there was one elf whom she liked much more comparing to the rest. This elf's name was Lord Xavius, and it was him who gifted the Queen a scepter inlayed with jewels and having thin magical sigils. His promise to her was that this gift will make her powerful and wealthy, but only when it is closed. She has lifted it up, and it shined like stars shine in the moonlight. The way the queen and her present looked that evening was amazing, and a lot of servants started crying. The first thing for which Azshara used her present was enhancing her legendary loveliness. Time went on, but Azshara seemed to look even better: young and appealing as always. A shiny aura that charmed those who looked upon her has enveloped the queen. This strange thing amazed others, and some of them even thought it was a divinity symbol.

As she became coronated, she started to implement her interests to life. She commanded to erect a luxurious castle that would be located on the shore. As nobles wanted to please Azshara, they suggested renaming their capital in her glory. She kindly accepted this offer, and after some active debates the city was renamed into Zin-Azshar (Azshara's glory in other words). There was a huge celebration among the elves: the new name was given. Besides that they loved the Queen so much, and at the same time they couldn’t stand the Highborne. They even believed that their ruler is one of them. Kaldorei adored her, but she respected and loved only Highborne. But people didn't like the Highborne as they were corrupted elite of nobles; and some of the Highborne also were one of the best magic power practitioners. As far as the castle was completed, the governor and her people moved into it.

Having an insurmountable wish to be aware of the Well’s mysteries, she decided that the Highborne should go with a group of elf priests. After some quests, the elves found out that they were able to control the cosmos flow of energy coming right from the Well. When it came to magic, the queen was chosen to complete this task: she would do that much better than others. While she was improving her skills of controlling the lake energy, the queen added a drop of its living water just inside of her scepter, thus, this Azshara's scepter has given her huge power. Having the incredible power, it could control the seas and rivers, numerous essences, and the energies of life which were running in the queen herself. The queen has seen what power it has and she gave it a new name [Sharas'dal, Scepter of Tides]. A lot of Highborne who were living in the castle continued studying the Well and its powers. They became more obsessed with this Well, so the Well's force and might were used for powerful spells creation. Permanent disturbance has arisen in the Well, and on its surface appeared gloomy storms while waters were becoming darker and darker until they turned black.

Once, the advisor of Azshara Counselor Xavius in whom she was the most confident came up to her. He suggested an idea of cleaning the world from the evil, and to make the ideal world by the help of the Well of Eternity power. But their attempt of using magic, however, drew the attention of Sargeras — the interested observer. He wanted his Burning Legion to take over Azeroth, so the Dark Titan possessed Xavius and pulled him under his power. After that he possessed the Highborne and finally the queen Azshara. Azshara could communicate with Sargeras as Xavius was helping her in that. The queen told about her wish to get rid of the races that are lesser. Sargeras was from cunning ones, so he cheated and made Azshara make a portal. Due to this portal, he was able to conquer Azeroth with his Burning Legion. This was later named the War of the Ancients.

Recommendation to kill Queen of Azshara:

When the portal leading to the other kingdom was practically opened, the team of elves and their comrades from the future started destroying it. Azshara noticed it and addressed to Mannoroth as he should have explained why this issue took place. He was really mad about it as he failed, and also he was angry because of the queen questioning him. Quite fast he realized his fault and understood that she was "a force against which only his lord and Archimonde would prove superior". He was forgiven for his mistake by Azshara, and she assured him that he should let Sargeras go into Kalimdor. The Prince Farondis, one of the Highborne, was lucky because he didn't deal with the Burning Legion. The prince was not far away from city Zin-Azshari, in Azsuna region. He decided that it will be right to eliminate the Well of Eternity, and use [Tidestone of Golganneth] for that. But tricky Vandros, one of the noble friends of Farondis, got to know about his plan and told everything to Azshara. The queen was quite quick to punish the Prince and his people for such intention. She ruined the Tidestone of Goganneth. After that a dark magic wave was unleashed at Azsuna and everyone living in it. The land split apart and lots of elves started roaming around as spirits. At that period a group of night elves and their friends from future caught Azshara. She struggled and used her magic to stay alive. After that she could escape.

Thank you for boost
Irina
Thank you for boost. Everything's fine. Improved my mood for a long time. I am with you for a long time.
Thank you for boost
alia16
Thank you for Leveling!! Very necessary thing.Excellent and high-quality service.Best ever!
Excellent!
Mariam
Wow! It's really great! Excellent dungeons. It's very interesting and it's very exciting.
Very fast service
Amanio Trupi
Very fast service, great communication, smooth & legit! Thanks!
Boost compleeted within an hour
Matt Doplen
Boost compleeted within an hour! top service
Outstanding
Olivia Kimmy
Outstanding, punctual professional and a really enjoyable customer service!
×