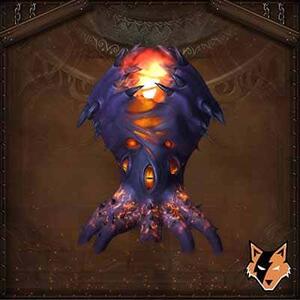 At the war times against the Black Empire, the Pantheon had formed the armies which task consisted of defeating every of the Old Gods. These armies were called the titan-forged. They succeeded, partly fulfilled the task and killed one of the Old Gods — Y'Shaarj. That moment the Pantheon found out that these Gods had such a strong connection with Azeroth that if they kill them all, it would influence and even harm not only Azeroth, but the whole world. In order to resist it, it was decided to design and erect enormous prisons in which they would be able to restrain all the evil the Old Gods had. And N'Zoth was a pioneer to get inside of them.

Why is this N'zoth Kill Boost worth buying?

Being horrified by the happenings, the Pantheon understood that it was risky and they couldn’t kill the Old Gods that had left like that. The vicious beasts infiltrated the world so much that the wrong decision could ruin the whole Azeroth. Being aware of the importance of the situation, the Pantheon was thinking about imprisoning the Old Gods, only in that case they would be able to protect Azeroth from the evil. That was going to be a hard nut to crack, but with the help of the keepers it would become possible to complete N'zoth Heroic Kill Run. The Pantheon gave an order to his armies to develop a plan that would help to get rid of all the Black Empire's tracks for eternity. They wanted to defeat every Old God separately. Once the beasts had become weaker, Archaedas would make underground chambers for keeping them there. After everything was prepared, Loken would enchant every prison with powerful magic that would help to offset the evil of the Old Gods.

Having developed their plans for actions, the armies launched the campaign. With the numerous battles they had on their way, they succeeded and reached the N’Zoth’s fortress that was located in the south-east. They overwhelmed him, and using their might put the beast into the subterranean prison.

Why is this WoW N'Zoth Kill carry worth buying?

Thank's for the amazing boost
Danny
I'm glad that I've found this site. With a help of this company, I've reached much-needed results. Thank you for the boost. Would d...
I recommend everything quickly a...
Adelia Rojkove
I recommend everything quickly and efficiently
Answered any questions or messag...
Jake
Answered any questions or messages within a day and delivered reasonably quick.
Fantastic leveling I have ever seen
Irene
Fantastic leveling I have ever seen! Thank you very much for it. It's really good and ineresting.
Fast service even if I didn't dr...
Alex Denver
Fast service even if I didn't drop anything.
Brilliant service
Rick O'cali
Brilliant service, No problems, very quick too.. recommend to all!
×