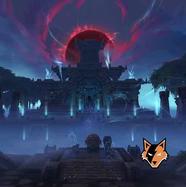 Is available from 4 of September on US region and 05.09.2018 on EU. Raid dungeon, which became available on "World of Warcraft: Battle for Azeroth" expansion. Foxstore is booking Uldir boost orders on first weeks to provide power leveling services for gear your characters in BiS PvE set.

Thousands years ago titans - creators of the world tried to learn more about their main enemy and have created underground labs to explore Void energy and Old Gods. It was first step to rid the world from impact of the evil. But it was a mistake! Lab was hidden from any eyes, but the nightmares found a way to get out from cages... Located at Nazmir with 8 bosses inside. But here you meet another dangerous. Crowds of blood trolls are be ready to kill everyone, who tries to enter their home and drink the blood till last drop. Since instance is not outdoor - players do not get bonuses from Warmode or other PvP features that you may obtain by Arena boost services.

Since achievements almost impossible to obtain from the start - 04 of September, Foxstore has raids on both sides - Alliance and Horde to do boost. With us your characters can get rewards. Pre-orders on Normal and Heroic Uldir run service already available! Be one of the lucky persons in World of Warcraft, who gets exclusive Mount from G'huun.

All the time titans did wrong. Experiments turned against them and whole chaos begun new era of almighty evil.