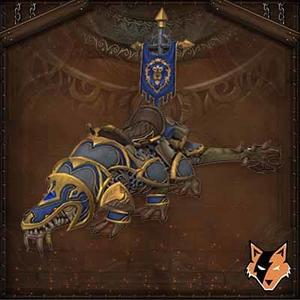 The Vicious War Basilisk is a World of Warcraft monster. Players can get it when their Arena or RBG Rating in BFA PVP Season 3 is higher than 1400. It’s not possible to receive this mount from Vicious Saddle and after the 3 PvP season of BFA is released, it won’t be possible too. The game WoW is adding plenty of various mounts which players can obtain in only set period of time. Due to this, such mounts become more unusual and valued. Nevertheless, you’ve got a chance to buy our boost — but hurry up in order not to miss this hot proposition!

We use the quickest and most popular method of getting this mount — in the Arena. That’s clear that to find a few teammates is less difficult than to select a well-organized RBG team. So, if you’re a newbie in PvP, you may get the achievements with us. If you purchase the Vicious Basilisk farm carry from us, the list of what you’ll gain will look like this:

Once the necessary frontier is reached, a letter will be sent to you. The letter with the new pet hiding in it. Unfortunately, you can't buy Vicious War Basilisk for gold in WoW; the hundreds of tough battles are its price. To success in this, it's not enough just trying. You have to know lots of other things like various nuances of how the battles go in the Arena, have a vast knowledge of your character's class and so on. It may really take much time. Instead of this, there's an easier way to solve this problem and change the way you travel which our team can suggest you. As mounts are not only the means of transport, but they also tell about the player and increase the prestige. In order to get a desired pet that will make your virtual life easier and more interesting, you need to meet some requirements.

How to get Vicious War Basilisk WoW mount:

Surprisingly fast Mythic.
Markus
Surprisingly fast Mythic.
Thanks for leveling
Warmonger777
Thanks for leveling
Cool
Kirill Klementin
Cool! Boost even more! Thank you! Continue to work in the same spirit! I respect your work!
The service was everything I exp...
Dina Smith
The service was everything I expected! Thanks so much!
Best Boostking Service
Ekaterina
Best Boostking Service! Realy Fast and nice Price! Thanks again!
Very fast communication A++ seller!
Daniel
Very fast communication A++ seller!! Seriously instant service provided!!
×