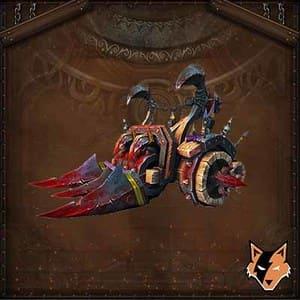 What is Meat Wagon Mount?

Scourge unit was built to spread plague and start epidemic in capitals of Alliance. Appearance of toxic machine inspired terror in minds of people. But the death echoes has become main horror of mortals. Sound of hearse lets victims hear signs of judgment day and accept destiny. Flesh catapult was weapon of fear until it fell into hands of Warcraft players... Community has gained an opportunity to look in eyes of fear and Buy Meat Wagon Mount. Modified version was constructed by engineers and has enough reworks to became harmless toy. Herbalists took part in creating visual upgrades. Red liquid pigment on knifes looked similar with blood and turned back dark atmosphere.

Why should you Buy Meat Wagon Mount:

Use the best chance to put exciting memories in the shelf of impressions with the most suitable transport in WoW! Write your name at the list of first happy owners and collect attention. Inspire champions with example of success until every level 20 gnome will select same traveling method. Start dialog with strangers from advice to Buy Meat Wagon Mount in WoW. Let all members of dialog understand benefits of luxury game.