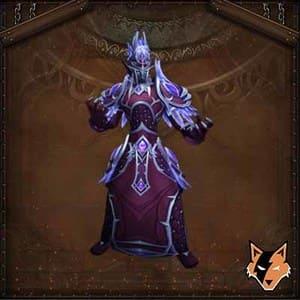 To unlock Nightborne race and be able to create characters you will need to get exalted reputation and finish quests, that are necessary. It will also guarantee you mount, that is account-wide.

Now they are not usual night elves. Their power increased with every new day with nightwell, but they also were completely dependent from it. Usual night elves changed with, their skin now have another color, they are gaining more and more power from nightwell. The powerful ones were names as Kaldorei. Meanwhile War they have to do something and Kaldorei created powerfull shield to protect themselves from invasions for thousands years. Since the third invasion of Legion had countless enemy force Kaldorei let Legion use their power on nightwell to save their nation. Once all Nightborne used to live in main area - Suramar. Some of them decided to leave own home, because of the evil of Legion. Those, who left home were not able to live without power of nightwell. Almost all of them lost mind or died. Talisra was great magician and also almost lost her mind and power, when she met champions, that helped her. She became to gather all followers, who left Kaldorei. That is how we met Nightborne racial. After help, that we do to Thalyssra - she and her followers (Shal'dorei) agreed to enter Horde. Be sure, that you have Battle for Azeroth to buy Nightborne race unlock boost.