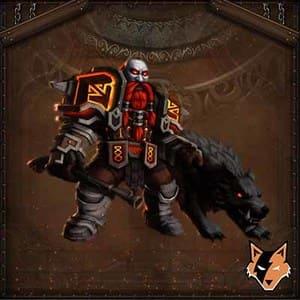 Dark Iron Dwarf is a new allied race of Alliance, that was announced in 7.3.5 and available in WoW BFA expansion. Meanwhile Horde has Mag'har Orcs - Alliance needs assist and ancient brave race with Mole Machines and iron forges is ready to join! To unlock Dark Iron Dwarf players should do achievements and scenario. Since it is account-wide - you will be able to create these characters also on another World of Warcraft account (on your battle.net).

To complete all this steps Foxstore will use the best boosters from our team, since it is important to do as soon, as possible, while no one will be able to create these characters at the start of World of Warcraft BFA. To Buy Dark Iron Dwarf Unlock race boost be sure, that you have Battle for Azeroth expansion for at least on one WoW account. This race also has own transmog gear - dark iron dwarf heritage armor, tabard and mount - Dark Iron Core Hound, that will be great discovery for all collectors.