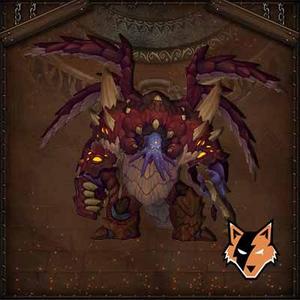 It is first raid instance of BFA. Players gonna level up their characters as soon, as possible to enter ancient halls, which bring horror and nightmare on everyone from Zandalari to Kul Tiras mainlands. Native Zandalar and blood trolls said legends about this place and G'huun. No one has seen him, but lots of brave warriors were kneed before new master, which just with power of mind broke their destinies.

Almost every creature at the Halls is under his control, just MOTHER - protection system is still working. It will not let evil come out for a short period of time, but might become a problem for heroes, that are trying to stop the Old Gods here, since MOTHER acts aggressive against any creature, that is trying to leave area, same as enter.

In time of Uldir Normal run you might meet 8 bosses with our team. You do not need to know any tactics, but if already have experience - much better result for entire raid. Before entering Ghuun lair, who is the last monster:

It makes impossible to finish with pug raids without good communication and leader, who knows what to do. Our statics have everyday Normal and Heroic Uldir runs. That is why Foxstore.pro is the best shop to have deals with. In this expansion the only option of loot is Personal. Foxstore can add players with same type of gear, they will trade you, so more equipment to our customers. While whole run customers can obtain items with 355-390+ ilvl.